Welcome to Our Town 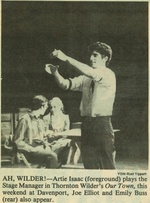 Have you ever thought that you failed at something? And then, 25 years later, all of a sudden, learned that you were wrong: you’d actually succeeded?

Have you ever taught a lesson that you didn’t truly understand? And, then, 25 years later, a student returns to teach you the very same lesson?

Are you an important part of someone’s life, but neither of you know each other?

My 25th college reunion was pretty much finished. On the final day of a long, fun, four-day weekend, I stopped in the big tent to grab a bagel, on my way to the airport. I saw Ann Klotz, the dear classmate who had cast and directed me in a student production of Our Town in 1981. We’d had a wonderful conversation the day before, but I thought one more conversation would be great. So I sat beside her.

Ann was in the middle of a conversation with a classmate who I didn’t know. Either we’d never met, or time had eroded that memory. She was telling Ann that our production of Our Town "taught me more about parenting than any other resource or teacher in my life."

Fans of Thornton Wilder’s 1938 classic of American theater remember the charming, heartwarming portrayal of small town life in Grover’s Corners. But it’s the third and final act of Our Town, often forgotten, that delivers Wilder’s main lesson: appreciate life by engaging deeply in the relationships of your loved ones. In that wrenching third act, a deceased citizen returns from the graveyard to express the pain of watching her survivors superficially go through the motions of life.

So, there is indeed much parenting advice in Our Town. Know your kids while you can. Be with them. (A wise teacher told me once that kids know what is most important to a parent: it’s whatever the parent does when coming home from work. What was I doing? Reading the mail. But the mail is so terribly unimportant. Ever since that lesson, I don’t go to the mail first. I go to my kids to join them in whatever they are doing.)

Back to Yale, earlier this month. Ann heard about the importance of Our Town to our classmate and introduced me to Heidi Callison Smith. Ann said, "Artie was in the play."

Heidi looked up, asked what role I played, and said, "Yes, that was you, wasn’t it?" I’d had the lead role, the "Stage Manager," first portrayed on Broadway by Frank Craven and adapted in 1977 for television by Hal Holbrook.

"Yes, that was me," I admitted. You see, I did not have a good memory of my performances. It had been too much memorization and I was constantly in fear of losing my place. Reviewing for The Yale Daily News, Catherine Bush had been positive (click here to read the original review), but not enough to overcome my own review, which distorted how I heard my father’s comment at the end of the first performance. Dad had come to New Haven to see the play. He came out of the audience and said, simply: "Don’t act for a living."

Because I was sure I had not done a very good job of it, I presumed for 25 years that my father (of blessed memory) meant, "You weren’t compelling. You aren’t an actor. Don’t act for a living." But several conversations during the Reunion revealed that my classmates thought my performance was fine, even very fine. Perhaps my father really said, "You are good enough to pursue acting. But it can be a heartbreaking profession. Don’t act for a living."

Anyway, all this was going through my head when Heidi said, "Yes, that was you, wasn’t it?"

"Then, I owe you my thanks," she continued. "You see, when my son died at the age of three and a half, it was because of you that I had no regrets."

I am forever indebted to Heidi for her comment and for our chance meeting. As an actor, I am so glad to learn that I didn’t actually get in the way of Wilder’s words and that she heard his life lesson. Strangly, though I had the honor of teaching Heidi this lesson in 1981, I myself was too young at the time to emotionally understand Wilder’s message. Now, 25 years later, Heidi returns the favor by teaching me the very same lesson.

But, most of all, my heart aches for her loss.

I recognize that this story is not mine to tell. I couldn’t tell the story (with or without Heidi’s name) without her permission. So I wrote asking for her permission and she replied:

Our conversation has continued to replay in my mind as well … Yes, you may certainly post "our" story on your blogsite … You may use my name if you like, but that’s totally up to you … About the only thing I would add is that I did work on the show in a minor capacity (as Ann’s mime "consultant"), and I might not have attended the show if Ann hadn’t given me a free pass in exchange for my "work" … A coincidence that surely was no coincidence, in hindsight …

I love talking about The Henry Years, and if I were home I could send you my story of Henry’s conception/life/death, a scripted presentation I gave before a group of women only a year after Henry’s death … It might fill out some of our joie de vivre, but my kids & I are still on our roadtrip (from VT to FL, currently in VA) …

And, too, I would love to stay in touch with you until our next reunion … You’re a special person in my life, and have been since Our Town … I was just unaware of your identity until now!

For more on the Reunion, click here. For my thank you letter to the cast and crew after our June 2008 independent community production of Our Town, click here.