The Green Fields of the Mind

[Longtime readers of Net Cotton Content will recall this seasonal post. With the end of another baseball season, “it must follow, as the night the day.” Feel free to skip the next few paragraphs. But read, below, “The Green Fields of the Mind.”]

When I began at Yale, Bart Giamatti began his term as Yale’s president.

Long afterwards, as the seventh Commissioner of Baseball, he became nationally famous — infamous among Reds fans — for banning Pete Rose. That summer, I wrote to the Times, applauding Bart’s ethical courage. His decision was difficult and made him lonely. Bart replied, recounting that he had said a benediction in my name. (I cherish that letter. It is below, in the margin.)

To me, he was first and foremost an artful writer. I was bowled over the first time I heard him speak. He began his term as Yale’s president by welcoming the Class of 1982 with a Freshman Address. Among his comments, he acknowledged that his own fear of arriving for his first year as president surely matched our fear of arriving as first-year students. But he put it this way: I know how you felt during this past summer, he said,

The worm of apprehension bit deep in the bud of anticipation.

A thousand new undergraduates leaned back and smiled with delight.

He loved Yale, and he loved baseball even more. Today, on the day that the baseball season is over, I recommend that you enjoy one of the greatest essays ever written. It’s from the heart of an enormously talented writer.

You don’t have to know the players. Just read it aloud.

The Green Fields of the Mind
A. Bartlett Giamatti, 1938-1989
It breaks your heart. It was designed to break your heart. The game begins in the spring, when everything else begins again, and it blossoms in the summer, filling the afternoons and evenings, and then as soon as the chill rains come, it stops and leaves you to face the fall alone. You count on it, rely on it to buffer the passage of time, to keep the memory of sunshine and high skies alive, and then, just when the days are all twilight, when you need it most, it stops. Today, October 2, a Sunday of rain and broken branches and leaf-clogged drains and slick streets, it stopped, and summer was gone.

Somehow, the summer seemed to slip by faster this time. Maybe it wasn’t this summer, but all the summers that, in this, my fortieth summer, slipped by so fast. There comes a time when every summer will have something of the autumn about it. Whatever the reason, it seemed to me that I was investing more and more time in baseball, making the game do more of the work that keeps time fat and slow and lazy. I was counting on the game’s deep patterns, three strikes, three outs, three times three innings, and its deepest impulse, to go out and back, to leave and to return home, to set the order of the day and to organize the daylight. I wrote a few things this last summer, this summer that did not last, nothing grand but some things, and yet that work was just camouflage. The real activity was done with the radio — not the all-seeing, all-falsifying television — and was the playing of the game in the only place it will last, the enclosed green field of the mind. There, in that warm, bright place, what the old poet called Mutability does not so quickly come.

But out here, on Sunday, October 2, where it rains all day, Dame Mutability never loses. She was in the crowd at Fenway yesterday, a gray day full of bluster and contradiction, when the Red Sox came up in the last half of the ninth trailing Baltimore 8-5, while the Yankees, rain delayed against Detroit, only needing to win one or have Boston lose one to win it all, sat in New York washing down cold cuts and beer and watching the Boston game. Boston had won two, the Yankees had lost two, and suddenly it seemed as if the whole season might go to the last day, or beyond, except here was Boston losing 8-5, while New York sat in its family room and put its feet up. Lynn, both ankles hurting now as they had in July, hits a single down the right field line. The crowd stirs. It is on its feet. Hobson, third baseman, former Bear Bryant quarterback, strong, quiet, over 100 RBIs, goes for three breaking balls and is out. The goddess smiles and encourages her agent, a canny journeyman named Nelson Briles.

Now comes a pinch hitter, Bernie Carbo, onetime Rookie of the Year, erratic, quick, a shade too handsome, so laidback he is always, in his soul, stretched out in the tall grass, one arm under his head, watching the clouds and laughing; now he looks over some low stuff unworthy of him and then, uncoiling, sends one out, straight on a rising line, over the centerfield wall, no cheap Fenway shot, but all of it, the physics as elegant as the arc the ball describes. 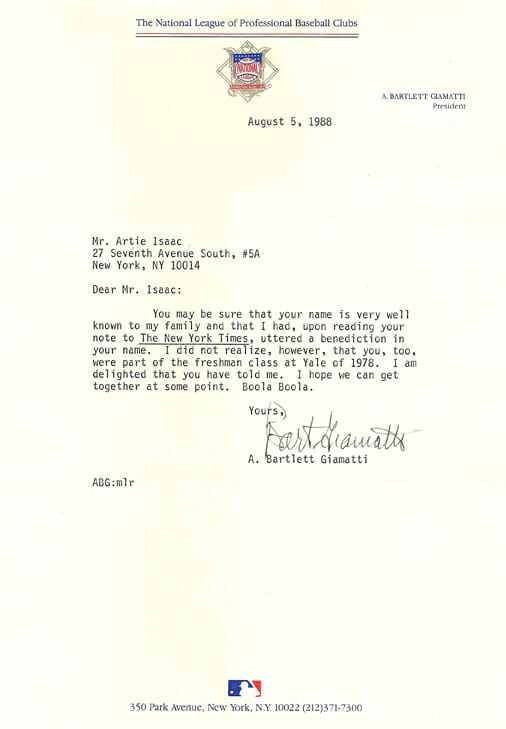 New England is on its feet, roaring. The summer will not pass. Roaring, they recall the evening, late and cold, in 1975, the sixth game of the World Series, perhaps the greatest baseball game played in the last fifty years, when Carbo, loose and easy, had uncoiled to tie the game that Fisk would win. It is 8-7, one out, and school will never start, rain will never come, sun will warm the back of your neck forever. Now Bailey, picked up from the National League recently, big arms, heavy gut, experienced, new to the league and the club; he fouls off two and then, checking, tentative, a big man off balance, he pops a soft liner to the first baseman. It is suddenly darker and later, and the announcer doing the game coast to coast, a New Yorker who works for a New York television station, sounds relieved. His little world, well-lit, hot-combed, split-second-timed, had no capacity to absorb this much gritty, grainy, contrary reality.

Cox swings a bat, stretches his long arms, bends his back, the rookie from Pawtucket who broke in two weeks earlier with a record six straight hits, the kid drafted ahead of Fred Lynn, rangy, smooth, cool. The count runs two and two, Briles is cagey, nothing too good, and Cox swings, the ball beginning toward the mound and then, in a jaunty, wayward dance, skipping past Briles, fainting to the right, skimming the last of the grass, finding the dirt, moving now like some small, purposeful marine creature negotiating the green deep, easily avoiding the jagged rock of second base, traveling steady and straight now out into the dark, silent recesses of center field.

The aisles are jammed, the place is on its feet, the wrappers, the programs, the Coke cups and peanut shells, the doctrines of an afternoon; the anxieties, the things that have to be done tomorrow, the regrets about yesterday, the accumulation of a summer: all forgotten, while hope, the anchor, bites and takes hold where a moment before it seemed we would be swept out with the tide. Rice is up. Rice, whom Aaron had said was the only one he’d ever seen with the ability to break his records. Rice, the best clutch hitter on the club, with the best slugging percentage in the league. Rice, so quick and strong he once checked his swing halfway through and snapped the bat in two. Rice, the Hammer of God sent to scourge the Yankees, the sound was overwhelming, fathers pounded their sons on the back, cars pulled off the road, households froze, New England exulted in its blessedness, and roared its thanks for all good things, for Rice and for a summer stretching halfway through October. Briles threw, Rice swung, and it was over. One pitch, a fly to center, and it stopped. Summer died in New England and like rain sliding off a roof, the crowd slipped out of Fenway, quickly, with only a steady murmur of concern for the drive ahead remaining of the roar. Mutability had turned the seasons and translated hope to memory once again. And, once again, she had used baseball, our best invention to stay change, to bring change on.

That is why it breaks my heart, that game — not because in New York they could win because Boston lost; in that, there is a rough justice, and a reminder to the Yankees of how slight and fragile are the circumstances that exalt one group of human beings over another. It breaks my heart because it was meant to foster in me again the illusion that there was something abiding, some pattern and some impulse that could come together to make a reality that would resist the corrosion; and because, after it had fostered again the most hungered-for illusion, the game was meant to stop, and betray precisely what it promised.

Of course, there are those who learn after the first few times. They grow out of sports. And there are others who were born with the wisdom to know that nothing lasts. These are the truly tough among us, the ones who can live without illusion. I am not that grown up or up-to-date. I am a simpler creature, tied to more primitive patterns and cycles. I need to think something lasts forever, and it might as well be that state of being that is a game; it might as well be that, in a green field, in the sun.