Brown’s Job is still the best 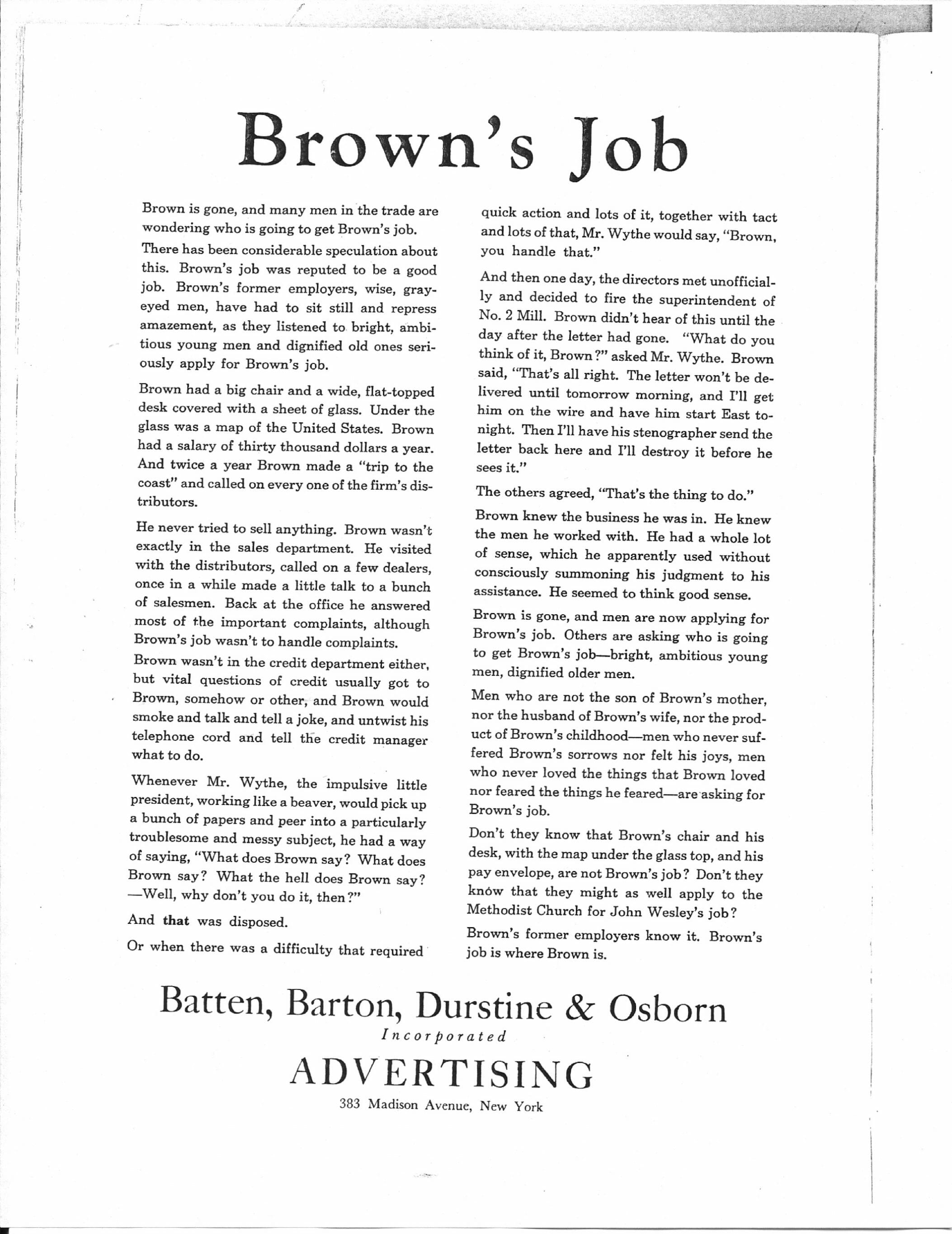 What is your favorite advertisement?

I fell in love with “Brown’s Job” the first time I read it. I read it 100 times during my advertising career to renew my inspiration for the work. I taught it to students of advertising to inspire them. It makes a great retirement gift. I have sent it to anyone who asks, “What is your favorite print advertisement?”

If you take the time to read it — and forgive the out-of-date treatment of gender —  you might think what I do when I read it: “Oh, I wish I’d written this advertisement.” This beautiful piece of writing works — as an advertisement for an advertising agency — because that’s what it is: a beautiful piece of writing. As such, it demonstrates a core talent of the agency. But it’s more than verbal craftsmanship, because it describes the colleagues we’ve most admired, or even the colleague you yourself can be when you are focused, sincere and thoughtful — when you are really thinking about the business at hand, rather than the thousand distractions that tempt you.

You can click on the picture to see it, but to read it, continue below, where I’ve re-typed for easier viewing.

explains that this wasn’t even written by an advertising copywriter:

Brown’s job, by the late F.R. Feland, former treasurer of BBDO, is one of those pieces of advertising copy that is legend up and down the industry. It floors me every time I read it — and it must a good many others, too, because requests still come into BBDO for copies or permission to reprint.

Mr. Feland wrote the text in 1920 for the BBDO house organ, “The Wedge”…and it was used later as a full page advertisement in the New York Times. In both uses, it created tremendous interest, receiving much editorial praise as an outstanding piece of agency propaganda. “Just why,” Mr. Feland once commented, “is a little hard to understand, inasmuch as, beyond our signature, it makes no reference to agency operation.”

Brown is gone, and many men in the trade are wondering who is going to get Brown’s job.

There has been considerable speculation about this. Brown’s job was reputed to be a good job. Brown’s former employers, wise gray-eyed men, have had to sit still and repress amazement, as they listened to bright, ambitious young men and dignified old ones seriously apply for Brown’s job.

Brown had a big chair and wide, flat-topped desk covered with a sheet of glass. Under the glass was a map of the United States. Brown had a salary of thirty thousand dollars a year. And twice a year Brown made a “trip to the coast” and called on every one of the firm’s distributors.

He never tried to sell anything. Brown wasn’t exactly in the sales department. He visited with the distributors, called on a few dealers, once in a while made a little talk to a bunch of salesmen. Back at the office he answered most of the important complaints, although Brown’s job wasn’t to handle complaints.

Brown wasn’t in the credit department either, but vital questions of credit usually got to Brown, somehow or other, and Brown would smoke and talk and tell a joke, and untwist his telephone cord and tell the credit manager what to do.

And that was disposed.

Or when there was a difficulty that required quick action and lots of it, together with tact and lots of that, Mr. Wythe would say, “Brown, you handle that.”

And then one day, the directors met unofficially and decided to fire the superintendent of the No. 2 Mill. Brown didn’t hear of this until the day after the letter had gone. “What do you think of it, Brown?” asked Mr. Wythe. Brown said, “That’s all right. The letter won’t be delivered until tomorrow morning, and I’ll get him on the wire and have him start East tonight. Then I’ll have his stenographer send the letter back here and I’ll destroy it before he sees it.”

The others agreed, “That’s the thing to do.”

Brown knew the business he was in. He knew the men he worked with. He had a whole lot of sense, which he apparently used without consciously summoning his judgment to his assistance. He seemed to think good sense.

Brown is gone, and men are now applying for Brown’s job. Others are asking who is going to get Brown’s job—bright, ambitious young men, dignified older men.

Brown’s former employers know it. Brown’s job is where Brown is.

Are you Brown? What would you have to learn to be Brown?